Hippies (derived from the word hipster) were the natural outgrowth of the Beat movement in the 1950s. Interested in an alternative lifestyle and rebelling against a society grown increasingly conformist and repressive, they were focused on freedom and getting back to nature.

Hippie clothing was often loose and made of natural fibers like cotton and hemp. Men and women grew their hair long and eschewed products and fussy styling (although, contrary to popular belief, they did still shampoo). The black turtlenecks and trousers worn by the Beatniks, male and female, morphed into peasant blouses and jeans. Anything handmade, whether sewn, knit or woven as macramé, was prized. Gradually, this extended towards dyeing one's own clothes, and the colorful tie-dye style became popular.

Hip hugger bell-bottom jeans, preferably with fringe at the ankle and flower patches, were seen everywhere. Peasant blouses, T-shirts, or just a skimpy halter top all went well with jeans. Accessories were anything handmade, and many included peace symbols as the Vietnam War escalated. 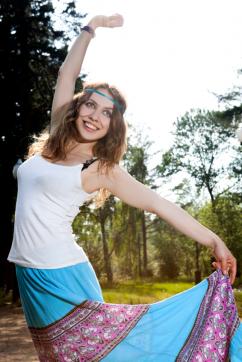 In ladies' 60s fashions, the skirts and dresses were nothing like what was seen on runways. Not since the 1920s did fashion change so radically, and youth define what was acceptable. The hemlines that shocked conservatives in the 1920s nearly gave some people apoplexy in the 1960s, as girls with good legs sported mini and even micro mini skirts. A short skirt was worn with suede knee-high boots in cool weather, or sandals on hot summer days.

Dresses were either short and skimmed the body, or they were long, loose peasant or granny dresses. A peasant dress reflected a Renaissance maiden, and flowing ribbons in the hair and on the dress often enhanced the look. Of course, there were also flowers.

Two of the most popular patterns in hippie clothing were floral and tie-dye, but there were others that showed up time and time again in the free-spirited clothing they wore. There was usually quite a bit of color and the clothes could involve: 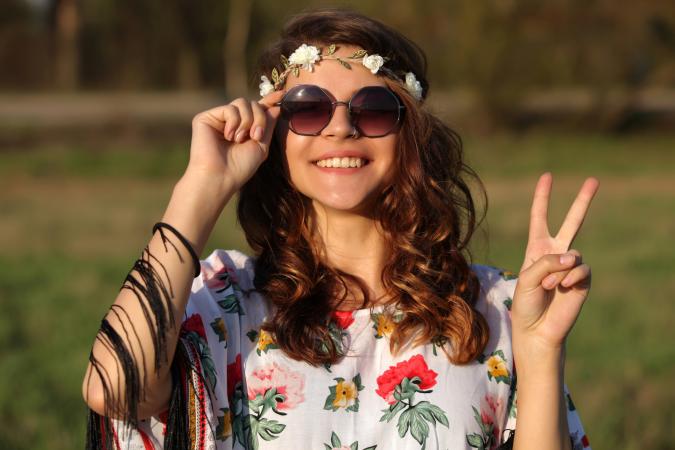 It's been talked about so much that it's now a cliché, or even a joke, but flowers were very emblematic of the hippie movement. Nothing represented peace and love so much as a flower, and they were everywhere. Floral patterns were popular on tops and dresses, and flower patches adorned skirts and jeans. Real flowers were worn in the hair, and flower images were painted on the face. Hippies argued that in the face of ugliness in the world, it was important to display as much natural beauty as possible.

Simple was key to 1960s hippie fashion. Women's jewelry was mostly handmade or derived from Native American or similar designs influenced by nature. Beads were hugely popular, as was any necklace sporting a peace sign. Music being so much a part of the hippie scene, jewelry that made music was desirable. Some women wore necklaces that featured bells as pendants, and many wore jangly ankle bracelets. The ankles received a lot of attention in general, because many hippies, especially those living on the warm west coast, preferred to go barefoot. This was not a popular time for pedicures.

While this was not the first time in fashion history that a youth movement affected the clothing industry, it did have the strongest impact. Designers found themselves very much taking their cues from the young people, and never again would the majority of American women be dictated to by the fashion industry. Trends continue to come and go, but women who found their own style and individuality in the 1960s have never let it go and passed much of it on to their daughters.