If you want to look like a million bucks without paying anywhere near that amount, celebrity dress knock offs are available at a fraction of the price. Mass produced with less expensive materials than their original counterparts, these replicas are widely available at department stores and online.

Celebrity Styles by Allen B. Schwartz

Following the annual awards shows, several designers rush to create celebrity dress replicas for cost-conscious consumers. When it comes to celebrity dress knock offs, Allen B. Schwartz has become the go-to designer for post-award show gowns. He can be seen on news and entertainment programs the day after the Oscars or Golden Globes showing off the beginnings of the gowns that his label will create for the masses. According to Schwartz, his dress replicas become a reality if he can "make it and sketch a dress and be finished with it in three hours."

Typically, Schwartz copies what he feels are the top four to six celebrity dresses at an awards show and then his team works quickly to create them for his A.B.S. label. This allows people to get their favorite celebrity dress for a huge discount -- in most cases the dresses average $250 to $350, where the stars pay $10,000 to $15,000 or more for their one-of-a-kind gowns.

These replicas have become a big hit for the prom crowd, where girls eager to look like a star for a night can do so affordably. Generally speaking, one or two copies of an A.B.S. replica gown is created by the day after an awards show or gala event, and using this example orders are taken. The actual dress is then available to the public within six to eight weeks. Stores that carry Schwartz designs include Nordstrom, Neiman Marcus, and Bloomingdale's.

2011's royal wedding of Prince William to Kate Middleton spawned a search for knock off wedding dresses that hadn't been seen since Prince Charles married Diana. Allen Schwartz had a copy ready within 12 hours of the wedding itself. Of course many other designers and bridal boutiques rushed out replicas of Middleton's gown, including: 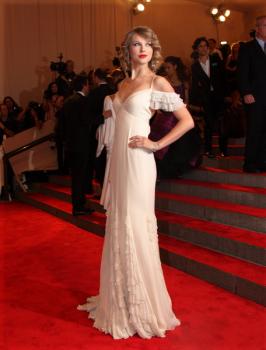 The television show Gossip Girl has gained a loyal fan following, and the stars' outfits have been praised for their chic styles. The show has inspired two collections of replica dresses and other garments so far. In 2009, designer Anna Sui created a line of Gossip Girl clothing for Target stores.

In late 2011, Romeo and Juliet Couture also released their own line of Gossip Girl clothing, working in conjunction with the creators and designers from the show. The collection is available at Saks Fifth Avenue, Neiman Marcus, and Kitson, or online at HauteLook.com.

While Allen Schwartz is the king of replicating celebrity designer gowns, you can find celebrity-inspired dresses at a number of locations. Try some of these online boutiques for gorgeous star-powered dresses:

Whether you're looking for a celebrity-inspired wedding gown or a prom dress that looks like something you saw on the red carpet, celebrity dress replicas are widely available. Though they lack the designer label and expensive fabrics of the originals, these knock-offs can look almost as good as the real thing - for a tiny fraction of the designer price tag.