One of the most popular eras for reproduction and vintage wear, women's fashion in the 1940s combined style and practicality to achieve a lasting elegance. This came as a surprise to those who lived through the era and remembered it for its shortages and difficulties, as well as some drabness. Wartime fashion presented a challenge, and everyone rose to that challenge as they did the much larger global one - with stellar results.

An Overview of Women's Fashion in the 1940s

The 1940s saw two distinctive styles in women's clothing. From the beginning of World War II in 1939 till the dawn of the New Look in 1947, women's dresses were knee-length and featured padded shoulders - one of the few adornments in clothing that was otherwise simple, thanks to wartime rationing. Sportswear became more common and women used a lot of ingenuity in mixing separates to make a wardrobe seem more diverse than it was. Homemade accessories and elaborate curls allowed women to show their flair without expense or waste. Hats, especially made from fabrics recycled from older pieces, went wild. 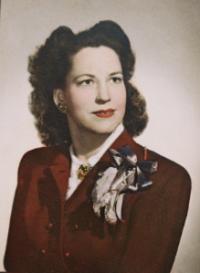 Silhouettes were austere, but even in suits or factory overalls, curls and bright lipstick kept the look feminine. With jackets shorter, the peplum became hugely popular, helping to narrow the hips while showing off a trim waist. Clothes were simple and practical, but women still managed to look attractive even during the hardest days of the war.

With the war over and materials available again, the Paris couturiers, who had been sidelined during the occupation of France, once again took the fashion helm. Christian Dior pioneered the New Look, which featured a nipped waist, longer lengths and fuller skirts, with yards and yards of fabric used and a more classically feminine image created. The New Look was built on Dior's desire to let the curves of the feminine body be molded by the clothes, with the style a secondary aspect.

Characteristics of the New Look included:

Women who had come to love the simplicity of the wartime styles protested, but this time, Paris won.

Womens Suit Looks from the 1940s

If you were to compare the '40s fashions with another decade, you might take a look at some of the suit designs from the '80s. Shoulders were equally as exaggerated and overstated as the decade marched on, especially as fabric rations during World War II dictated less voluminous garments. As the war ended, suits became more full, and jackets returned to full lengths and covered the entirety of dresses and suit separates. Take a look at some of these popular features:

Accessories were key for the stylish, suit-wearing woman in the '40s, most likely like none of us can imagine today. It was simply unthinkable, even during the war, to leave the home without the proper finishing items, including a basic purse, matching shoes, a hat, and gloves. When stockings were no longer available during WWII, women simply painted lines on the backs of their legs to simulate stocking seaming and to complement suit looks that required more formal dress.

Hats were very daring during the '40s, often taking on asymmetrical or angled shapes that hit the head in a slightly more unusual manner. Hat pins were used to secure hats, often available in unusual colors and complete with trimmings such as feathers and ribbon, and were carefully selected to complement the suit color and style. Trimmings could often be replaced and substituted as necessary, especially during the time of WWII, when fabric was scarce and clothing had to be remade and refashioned.

While Dior was leading the way with his new New Look, other designers in the 40s were likewise pioneering new styles and materials. These included:

The symbol of working women during the war, the Rosie look is personified first and foremost by slacks, which was something very few women wore up till that point. Film star Marlene Dietrich wore trousers in the 1930s and it was considered shocking. Reproductions of women's fashions in the 1940s focus mostly on the dresses, but for most women, their daily wardrobe consisted of loose, comfortable trousers or overalls and sturdy boots. Hair was carefully tied up in a colorful scarf. A "Rosie" might still wear lipstick and keep her eyebrows well-manicured, but she was an important part of the war effort, and style was not part of the equation.

For a young, unmarried woman, time off work was time for fun, even with few men around. Evening dresses were still long, but not nearly as elaborate as in former decades, even for the wealthiest members of society. Formal gowns were rarely worn at the height of the war. Even the Oscars shunned formal attire, with attendees wearing cocktail dresses and even suits instead.

When women went dancing, the preference again was for the knee-length rayon dresses worn during the day. These dresses were best for swing and jitterbug dancing, exuberant dances popular because they allowed everyone to let off steam in an uncertain time. The stocking shortage meant that women wore leg makeup, and some did indeed paint lines down their legs to look like seams, as is often shown in films. Women compensated for the simple dresses and lack of stockings with Bakelite jewelry and fake flowers in their hair, adding color and verve to a dark time.

Where to Find 1940s Clothing 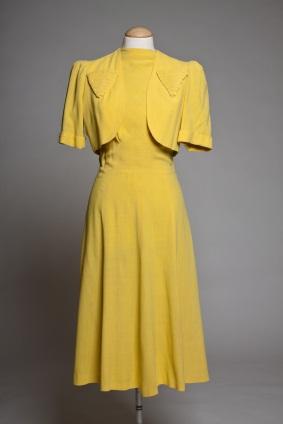 While many pieces either didn't survive or fell out of fashion, it is still possible to find both vintage 1940s women's clothing and 1940s reproductions online, including at:

Although the classic 1940s look is the wartime style, from the curls and hats down to the ankle-strap shoes, the postwar look held sway through the 1950s. Women's fashion would not regain that much comfort and practicality until the clothing revolution of the 1960s. However, what the women of the 1940s had forged was not forgotten. Trousers never went completely out of fashion again. Women, having had a taste of the working life, fought hard to stay in the workplace.