While many people think of the 1920s as the years when women's clothes became radical, women's fashions in the 1910s made a definitive switch from what had come before, marking the new century as something special.

Women's Fashions in the 1910s Overview

There were many aspects to women's fashion during this time period that stood out. 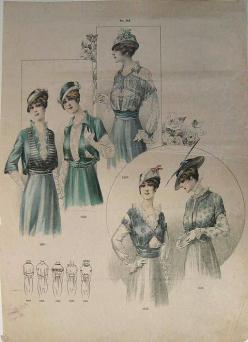 Until 1908, the curvaceous silhouette that had characterized the 1890s was still in vogue, but it underwent some changes. The push was for corsetry that was more supportive of the spine and abdomen. Clothing was moving away from the heavy, restrictive styles that required bustles and padding and towards a more natural form in order to showcase the female body.

By 1910, designers such as Paul Poiret, Lucile (Lady Duff Gordon), and Jacques Doucet had revolutionized fashion by producing clothes that defined the more natural contours of the female form. These designers rebelled against the old Edwardian notion of women being required to have a constricted waist, and instead promoted a silhouette that was less restrictive and fuller in figure. Women essentially wanted healthier lives and healthier clothes to go with those lives.

The Rise of Feminism and Functional Clothing

The health movement went hand-in-hand with feminism. Women in England and the United States were fighting hard for the right to vote and wanted other liberties as well. For those who think the women's movement was solely about the efforts made in the 1970s, nothing could be further from the truth - women rioted and went to jail in their struggles for equality during this time. While they fought for suffrage, men joined with them to push for more streamlined fashions. Women were joining the professions and as such, adapted some men's clothing styles such as the suit, shirt, hard collar and tie, all worn over long but simple skirts.

Slowly but surely, women's clothing was becoming straighter and more curveless. It was during the 1910s, particularly around 1918/19, that the boyish look of the 1920s began to develop. In addition to women's fashion becoming more boyish, the sporting and bicycling fads demanded more practical clothing. Bloomers were seen as too radical, but the push was on for clothing that was functional as well as fashionable.

All About the Theatrics 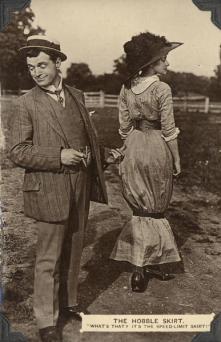 As anyone who's seen the film Titanic knows, early women's fashions in the 1910s were also characterized by an artistic, theatrical look. Paul Poiret designed sheath dresses influenced by Orientalism, as seen in artist Leon Bakst's costume designs for the Ballet Russes. Corsets were still worn, but they were longer lined and hewed more to the natural shape of the body. Although they continued to be worn through the 1920s, bras and other lighter foundation garments were being introduced. The lines and shapes were softer and dresses themselves became lighter and more manageable.

This changed briefly when the "hobble skirt" came into vogue; its hemline was so narrow that a woman was forced to hobble so as not to rip her skirt. Fortunately, this did not last long.

From 1895 to 1914, fashions were overall lovely, and the era was deemed by the French La Belle Epoque - the beautiful time.

Women's Fashions and World War One

Changing times made different clothing items a necessity for women.

A Push for Practicality

When war broke out in 1914, it changed everything in the Western world forever. The push for more practical clothing for women that had started 10 years earlier was now a necessity, as women, especially in Europe, had to take on what had been considered "men's work." While the advent of women in the workplace was nothing like what was seen in the 1940s, clothes still had to be more practical and less restrictive. Even society women favored simpler dress, as many of them joined voluntary aid groups or became nurses. Evening dresses were still beautiful, but simplicity reigned - elaborate was inappropriate in the face of so much misery. 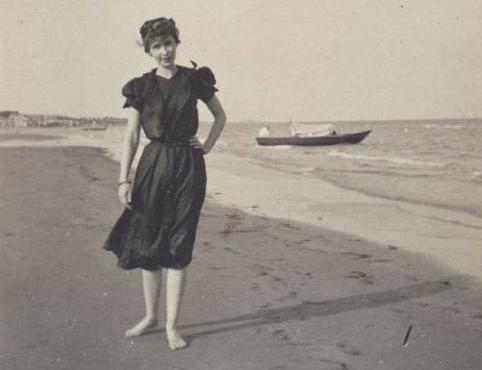 Many are surprised when studying women's fashions in the 1910s to learn that this was when hemlines began to rise. In 1915, skirts were as short as mid-calf. Unlike the flapper dresses that were to follow in the next decade, this was purely out of necessity - nurses and other working women needed to be freer to move. Additionally, a shorter skirt would accumulate less dirt - no one had time for excessive laundering. But legs were kept from sight under thick dark stockings and boots that extended to the mid-calf.

While the war was still ongoing, around 1915, Gabrielle Chanel started producing hats and loose-fitting dress that belted at the hip. By 1916, she'd revolutionized fashion by manufacturing casual pleated skirts from practical Rodier wool jersey, which had been restricted to men's underwear before the war.

She teamed these casual pleated skirts with sailor-style sweaters, which soon became known as luxury sportswear of the era, as showcased by leading fashion publications - such as Vogue. They made women look laid-back youthful, which soon attracted wealthy clientele, and kickstarted Chanel's popularity in the fashion world.

Women in England won the vote immediately after the war in 1918, with women in the US following in 1920. The worldwide catastrophe was to have a lasting effect on fashion. Women's daywear would never again be quite as frivolous, nor would women be consigned completely to the domestic world. Values had changed, as had manners and mores, and fashion changed as well - for good.