Gwen Stefani clothes are becoming as popular as the singer herself, with the line flaunting cutting-edge creativity and great designs.

A Great Brand by an Influential Designer

Gwen Stefani has been a musical artist whose made an impact for two decades. Starting out with the band "No Doubt," Stefani skyrocketed to fame and went on to produce her first solo album in 2004. Full of pop music influenced by 1980s musical beats, the album - "Love. Angel. Music. Baby." - achieved astronomical success. Its single, "Hollaback Girl," was the first digital download to sell one million copies. However, Stefani's achievements are not limited to music, as she has been recognized as an accomplished designer. 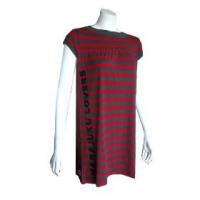 Her fashion label, called L.A.M.B., was founded in 2003, and had its first showcases on the runway the following year. The name is the acronym of "Love. Angel. Music. Baby.", Stefani's way of paying homage to her debut solo album. The fashion line is mostly clothing, but also includes accessories such as handbags, watches, shoes and a specialty fragrance.

Stefani has long held an affinity for international cultures, and her clothing line is an expression of that, deriving from many different countries such as Japan, India, Jamaica and Guatemala. Designing came easily to Stefani, who comes from a family line of seamstresses. Since L.A.M.B.'s start, several celebrities have flaunted the clothes, including Nicole Kidman and Paris Hilton. Stefani can also be seen wearing her own line quite often, as it truly emulates the singer's own personal fashion sense.

Gwen Stefani clothes became even more popular when they debuted at New York Fashion Week in 2005, and has brought in an annual invoice of $90 million ever since. Fashion critics were impressed with Stefani's style and ability to create original designs that were easily worn by both Hollywood big names and mainstream mall shoppers. No matter what your level of affluence, the L.A.M.B. line is appropriate for your lifestyle. The label has become so popular in recent years that Stefani recently expanded into a second fashion line known as Harajuku Lovers. This secondary label focuses more on Japanese style trends, and has become popular with women looking for that cute Asian-influenced flair that sets them apart from the crowd.

If you want to purchase Gwen Stefani apparel for yourself, you'll find it's easy. Start by visiting L.A.M.B.'s official website, where you can order Stefani's creative takes on standard fashions. These include sweaters, graphic tees, and a variety of accessories.

Unfortunately, L.A.M.B. is not for shoppers on a budget. The clothing and other items on the site tend to be a bit pricey, and the selection is often scant. However, there are a few other ways to obtain this phenomenal line without blowing the bank.

Try an auction site such as eBay.com for the latest selection of L.A.M.B. items, as well as other great designers that have come out of the entertainment industry. Clothing found on eBay is often brand new (even with the tags still on, in some cases), and yet it can be won for a third of the price. You'll never know until you try, so don't be afraid to surf the net for some great deals.

You can also find a great selection at local department and specialty stores. To find a retailer near you, use the "store locator" function at L.A.M.B.'s website. Depending upon the season, you will be able to find a great new look without having to go through the shipping and sizing hassle associated with online shopping.

Gwen Stefani clothes are a great way to revamp your look and show off an unconventional style that only continues to grow in popularity.