She's graced the big screen, sung her heart out on stages across the world and had a profound impact on the entertainment industry, but in the fashion world it's the gowns worn by Jennifer Lopez that have made the strongest impression. The multifaceted star is known for her impeccable sense of style, both on and off the red carpet!

A Style Unlike Any Other

Jennifer Lopez is known for being something of a maverick in the entertainment industry. She's capitalized on music, film, dance and fashion, and it's no understatement that she's been successful in most of her endeavors. Of course, nothing captures the public's attention more than the manner in which celebrities present themselves. In Lopez's case, there are no worries: The woman transformed her Bronx-influenced street style into the consistently glamorous, polished and chic starlet we are all so familiar with today.

It goes without saying that her looks have been fodder for plenty of media attention. Some, of course, have been instant successes, while others were brow-raising enough to leave a lasting impression on the public. Regardless of how well received her ensembles may be at any given point, however, one thing is for sure: Jennifer Lopez has earned herself a permanent place in the annals of celebrity fashion history.

Gowns Worn By Jennifer Lopez Through the Years 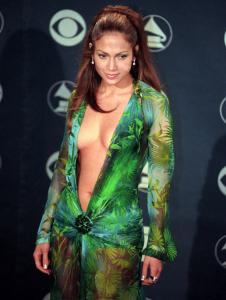 Never mind that she's borne two children, gone through several highly publicized (and undeniably stressful) breakups and been under the scrutiny of the media and general public for years. None of this has phased the outward beauty that Jennifer Lopez consistently exudes. It's not just her flawless hair and makeup that earn points for their perfection (and she can thank her arsenal of professionals for that!), it's also her wardrobe. Through the years, Lopez has worn some truly memorable evening gowns to awards ceremonies, movie premieres and for magazine photo shoots. There's some serious history, and like any woman, some of it is great and some of it is best left a distant memory. Let's take a peek at some of the gowns worn by Jennifer Lopez over the past decade and a half.

It's safe to say that this is just the tip of the iceberg as far as Jennifer Lopez's dynamic, oft-discussed style goes. With numerous activities on her ever-growing agenda, Lopez is guaranteed to show off even more enviable, glamorous and perhaps even controversial styles over the years.