When celebrities walk the red carpet at film premieres, award shows or a myriad of other galas, they always seem to look flawless. One of the reasons they are able to achieve such perfection is because they are often wearing designer, one-of-a-kind gowns. While you may not have that many occasions special enough to wear glamorous gowns as frequently as the rich and famous do, you can still duplicate the look. The designer dress knockoff market is huge and allows you to wear expensive frocks at a fraction of the price.

A large variety of brands and companies supply consumers with inexpensive versions of regularly costly couture. There are mass retailers and some smaller boutique brands that all sell popular knockoff versions of the fabulous gowns regularly seen in magazines and atop "Best Dressed" lists. Here are some brands that stand out:

When it comes to almost exact replicas of designer gowns, and women's clothing in general, there is no brand more affordable and stylish than Forever 21. One of the best things about this trendy clothing store is that they constantly update their stock with thousands of new items a week, so you will always have an endless amount of things to choose from. They sell designer-inspired evening gowns, as well as more casual dresses for daily wear.

Along the same vein as Forever 21, this Swedish retail company has several US locations and is credited for offering stylish clothing that replicates what is seen on the fashion runways. However, unlike Forever 21, H&M often collaborates with successful designers, including Karl Lagerfeld, Stella McCartney, Roberto Cavalli and Lanvin, to create affordable collections for the H&M customer. They stock everything from dresses for work to those for formal occasions and weekend nights out on the town.

This UK fashion brand is known for their stylish stock of designer-inspired clothing at a fraction of the price. While their stateside dominance has been a slow build, they are currently implementing more US locations. They too have collaborated with other designers, including supermodel Kate Moss. Their designer-inspired dress clothing is a healthy mixture of edgy, sophisticated and trendy. Not only does it reflect what's currently being worn by American celebrities, but international ones as well.

Specializing in clothing, accessories and everything in between, Zara is a Spanish retailer that consistently offers designer knockoff clothing at incredibly affordable prices. With a healthy amount of stores worldwide, the clothing they sell is ideal for women who want to duplicate fashionable runway and red carpet looks without breaking the bank. Their dress selection is especially impressive because they look quite expensive, but most are priced under $100.

Many department and bridal stores also sell knockoff dresses. There are also an abundance of online retailers who specialize in replicas of glamorous gowns at affordable prices. After award shows, designers commonly rush to produce replicas inspired by the latest celeb-worn looks and get them out for the public to purchase, sometimes in just a few days. A few additional retailers include: 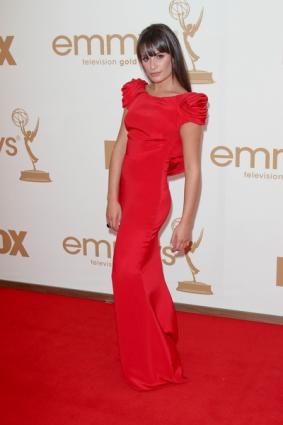 The dresses in Hollywood set the standard for the latest styles and trends. The most copied dresses are the ones that stars wear on the red carpet to various award shows. Who wouldn't want to wear these unforgettable dresses that have been seen on the red carpet? The following have been replicated by numerous designers:

There are a few things that you should be mindful of when deciding to purchase a designer dress knockoff.

If you choose to purchase a dress that is a designer knockoff, you'll be getting a look that is both affordable and glamorous. Wear it with loads of confidence and personalize the look by finishing it off with accessories and shoes that give your gown an added flair.