Featuring tight bodices and flowing or fitted skirts, high heels, and sexy undergarments, 1950s fashion for women still has an appeal as well as a mystique. Current designs hearken back to the era, and vintage or vintage reproduction styles have been in vogue for years.

Fashion in the 50s

The classic 1950s look of the hourglass shape is sensual and more realistic than later fashions that demanded a woman be stick-thin to look stylish. You didn't have to spend time at the gym to get your waist slim enough to wear a 1950s dress because you had foundation garments to take care of any little bulges. These may not have been terribly comfortable, but once women got used to them, they were just part of their daily wardrobe. 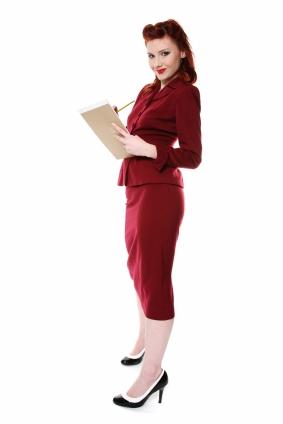 At the time, the "New Look" (which actually began in 1947) was a radical departure for women who had been used to rationing during the war. Whether a woman worked in a factory or an office, clothes had to be simple and practical. No one could fuss over their appearance too much when there was a war to be won. Afterward, however, women began to want prettier clothes again, and such clothes were soon available. Dresses with flowing skirts in bright colorful fabrics quickly replaced the utilitarian look of wartime clothes.

A woman may have worn a simple shift or smock to do housework, but when she dressed to run errands or make the school run, she made sure she was properly dressed. Stepping outside of the door often required a hat, gloves, and a smart handbag to accessorize her ladylike outfit.

While some women derided the New Look as one that was fussy, impractical, and uncomfortable, as well as forcing women back into a decorative role after they had proven their strength and abilities, other women embraced the opportunity to dress prettily in a way they hadn't in years. However, pant suits were not acceptable for the well-dressed lady heading out in the 50s.

Around 1955, fashion gradually shifted once again. Instead of the full-hipped skirts so popular during the first half of the decade, silhouettes became slimmer. Sheath dresses were more common and often topped with a cropped bolero jacket. The hourglass figure gave way to a more columnar shape. Instead of the plaid and polka dots so popular in the early 50s, late-50s styles featured more monochrome fabrics.

The 1950s look available in costume shops is for girls, not women. Girls wore poodle skirts, bobby sox, saddle shoes, and ponytails. Women might wear sweater sets or blouses and skirts, but for most social events, they wore dresses.

Dress styles of the 1950s fell into two categories. There was the dress that was fitted through the waist and then fell into a wide skirt, sometimes a full circle skirt, from just above the hip. They often wore a crinoline underneath to give even more shape to the skirt.

The other sort of dress featured a pencil skirt and was much more form-fitting, demanding a firm girdle to look right. It skimmed the body to the knees, and even the slit at the back didn't allow a long stride, so women 'wiggled' when they walked; accordingly, sometimes this style of dress is called a wiggle dress.

Neutral colors were popular in the 1950s, but many of the styles were hand-painted or finished with whimsical designs in the form of flowers, animals, and unusual hunting scenes. In the same vein, rick rack, ribbons, sequins, and beading were used to decorate 1950s dresses and add interest. As the decade marched on, designs became more geometric and futuristic in a nod to more modern tastes.

Wondering what some of the most popular 1950s style dresses were? Here's a taste of what was most popular during the decade.

In the late 1940s, Dior introduced a special dress style featuring a high-fashion, highly feminine look with exaggerated hips, nipped-in stomachs, and high, pointed bustlines. The New Look was a dominant style on the fashion scene for ten years, but it was accompanied by evolving fashions of the 1950s that eventually gave way to some of the most exciting and liberated look of the 1960s.

While the New Look may have been introduced in 1947, it took some time for the style to trickle down to average American women, particularly as they slowly built up their wardrobes post-war. With less exaggeration on the female form than Dior may have intended, the New Look quickly became a staple for most women of the '50s.

The New Look was characterized by:

A poodle skirt was traditionally a full circle skirt - already a nice change from the slimmer lines that wartime rationing had imposed. It was made of a brightly colored felt that could take an ironed-on appliqué, and the appliqué of choice was a lively little poodle, usually with a bow on its head and a sparkly leash attached that wound its way up to the skirt's waist. The poodle often had a sparkly collar and bright eyes, too.

This skirt, worn atop a crinoline for extra shape and swish, and as part of an outfit that included bobby sox, saddle shoes, a blouse and cardigan, scarf and a ponytail, remains one of the defining images of the 1950s, so much so that it is almost impossible to shop for a 1950s costume and not find a reproduction poodle skirt.

Not Their Mothers' Skirts

The 1950s began the era of the teenager as we know it. This was the first time that movies, books, gadgets, music and fashions were made and marketed specifically to adolescents. In previous generations, there had been "junior" fashions, but they were not very different from what adults were wearing. By the 1950s, fashion changed radically and teens had their own look. 1950s fashion for women certainly included a lot of novelty prints, and casual day wear might include a blouse and cardigan over a bright skirt, but an adult woman would not wear a poodle skirt under any circumstances - that was something just for the teenage girls.

As mentioned above, costume poodle skirts are ubiquitous and can even be bought in drugstores every Halloween. But these look as cheap as they are, so if you want something better for more than one night, you need to go elsewhere, which is ridiculously easy. Unlike with other vintage fashions, this is an item you don't necessarily want as an original - the glue from the appliqués tends to disintegrate and the felt pills, so it's the rare genuine poodle skirt that can still be worn well. But plenty of reproduction designers have these skirts available, and since the skirts are wide, you don't need to try them on so long as you get the correct waist measurement, making them an easy online purchase.

Here are a few good online resources for poodle skirts:

Make Your Own Poodle Skirt

Even if you don't sew, you can probably still make a poodle skirt. There are plenty of Web sites offering patterns, including Free Applique, which has a very authentic poodle appliqué available, all ready for downloading. You can easily find a pattern for a circle skirt with an elastic waist if you don't want to bother with a zipper. Then all that's needed is a trip to the fabric store for the felt and whatever you wish to make the appliqué from - black fuzzy fabric is ideal - and probably an afternoon of crafting. Sure, it's more work than buying a skirt online, but it's worth it to have something uniquely your own.

Women wore suits as daywear or work wear for several decades, and the 1950s was no exception. The changes in 1950s fashion extended to their suits, as well with jackets that nipped the waist and skirts that were either full, or, more commonly, fitted. Sleeves were shorter, the better to show off bracelets and gloves, and colors were simple. A bright patterned dress was for dates; at work, a more monochromatic look was expected, although a woman could still wear colorful jewelry.

There were typically two common coat styles for women in the 1950s. The swagger style was wide and roomy with no designated waist. This coat fit well over full skirts and was also perfect for hiding pregnant bellies. It typically ranged in length from hip-length to past the knees.

A more streamlined belted style similar to a trench coat often fell past knee-length and could be worn over slim suits and skirts. Wide collars and fur lining were often featured. 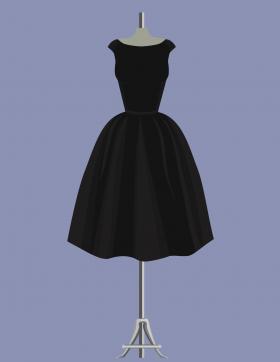 Evening gowns were still very much gowns in the 1950s whether they were designer or homemade. While they were usually full and often swept the floor while those with shorter lengths sported full skirts. A high-style gown might be more intricately designed with a plunging back and a snug, fishtail fit, while tea-length dresses might feature several tiers of fabric billowing out into a wide, hoop shape. Floor-length gowns, however, were more fitted. They often featured a slim bodice, with or without draping or shirring, and long skirts that fit closely to the body or were only slightly flared.

Fabrics like organdy, chiffon, silk, and tulle were very popular, and bows, flowers or other accessories were often featured. To keep warm, a woman typically wore a stole in either fur or fabric over her shoulders. Some elaborate designer gowns came with a stole as part of the ensemble. 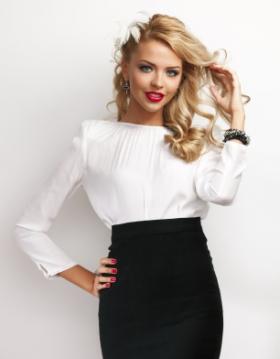 Between vintage patterns, vintage shops and reproductions, anyone can dress in 1950s style all the time. Unlike the 1950s, you can have items tailored to fit comfortably rather than squeeze into girdles. Unless, of course, you want to.

You can find vintage and reproduction 50s fashions for women in many vintage clothing boutiques, such as:

Turning Back the Clock

While you can't really go back in time to have a first-hand look at these vintage fashions, you can get as close to that experience as possible by investing in a few of these garments and experiencing how they flatter the figure and make you feel great. Due to the high quality of tailoring and good materials, vintage lovers can find many 50s clothes in good condition today. Looking back on how much fashion has changed from one decade to another is a great way for the modern woman to see just how far style has come.